The only new Thor appearance was by Lady Thor. She appeared in a double-page crowd scene in SHIELD #1.
Posted by ditkomania at 7:05 AM No comments:

WHAT'S BETTER THAN NEW THOR APPEARANCES ON A CHRISTMAS EVE?

IN THE SHOPS FIVE YEARS AGO TODAY

AVENGERS #24.now $4.99
Writer: Jonathan Hickman   Art: Esad Ribic
"ROGUE PLANET" - Part 1 of 5
Captain America and Iron Man plan for the next version of the Avengers.  A runaway planet is on a collision course with Earth. Thor first appears on page 10 in a two page comedy relief sequence that is a definite nod to the Lee/Kirby style of Sixties story-telling. Thor doesn't appear again until two pages at the end of the issue. 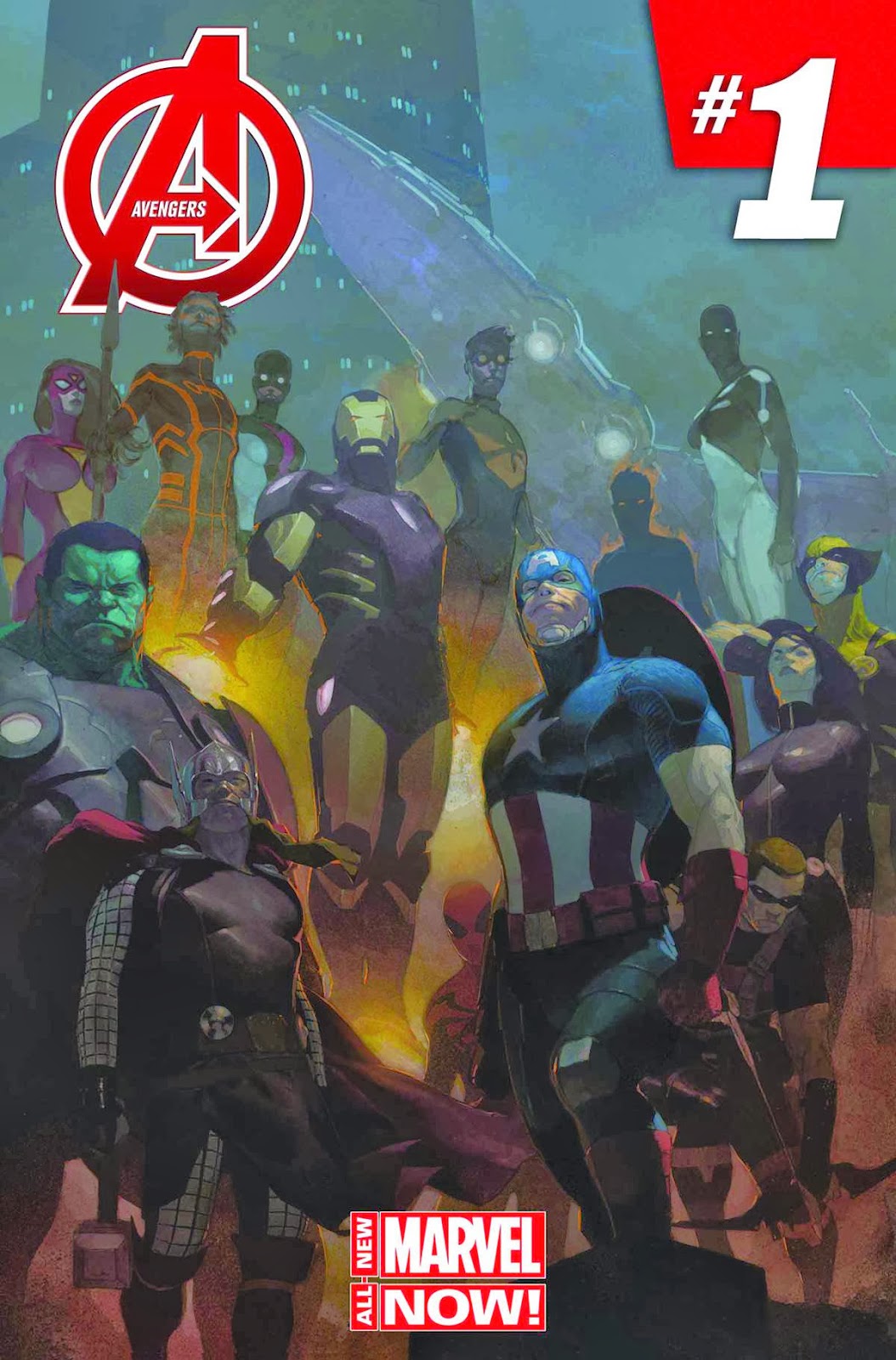 Don't be fooled by the big #1. It refers to the issue being the perfect jumping on point because of the beginning of a new story arc. It IS actually AVENGERS #24. 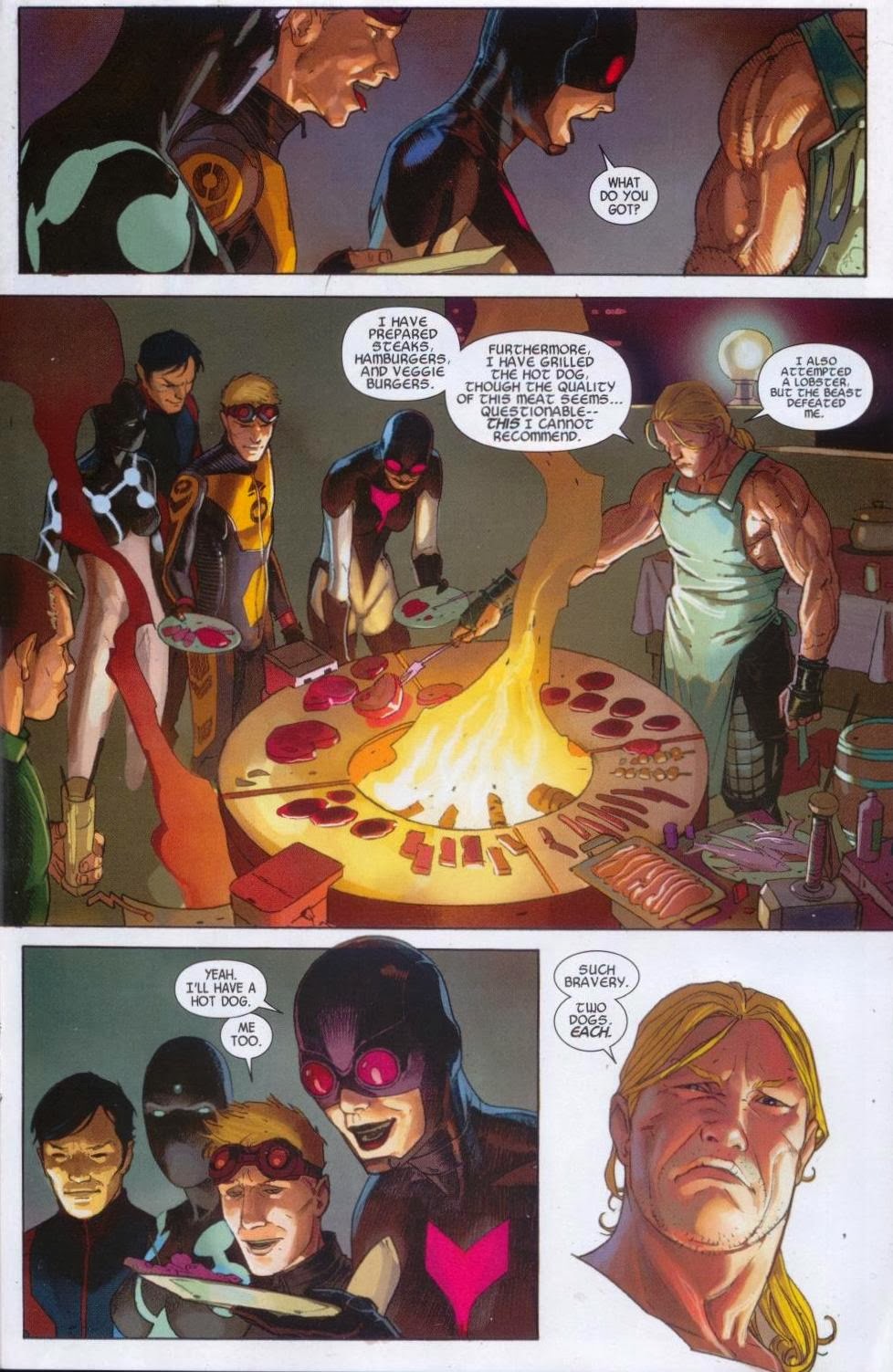 Here's 25% of Thor's participation in the issue. 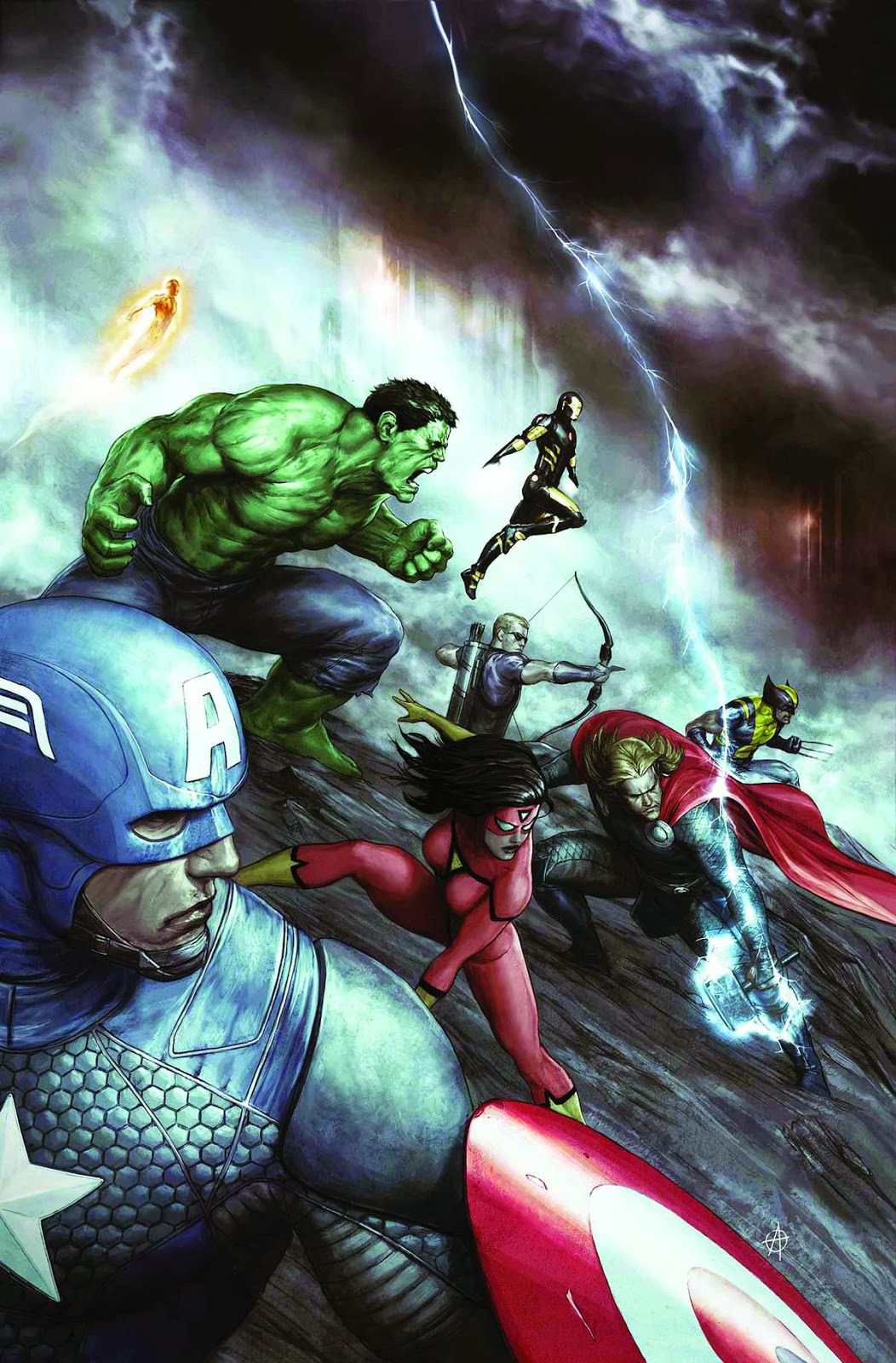 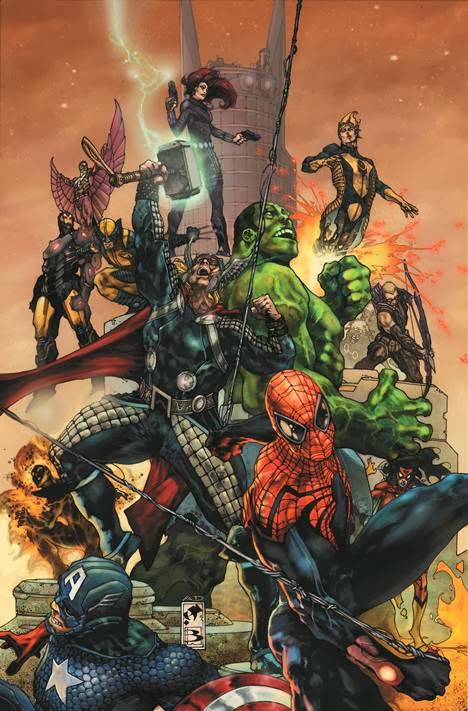 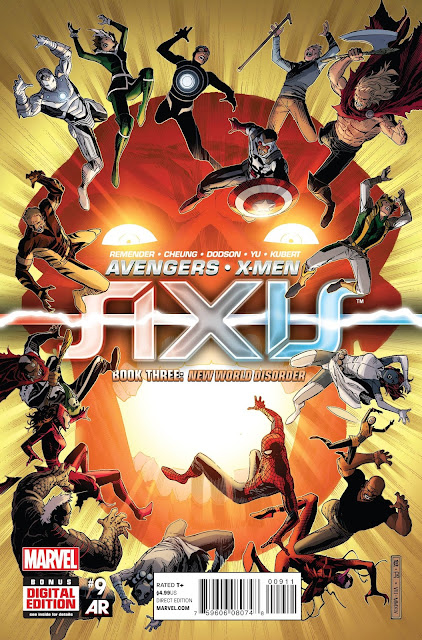 AVENGERS AND X-MEN AXIS #9 $4.99
(W) Rick Remender (A/CA) Jim Cheung
ACT III: NEW WORLD DISORDER
Who will live? Who will die? Who will remain inverted? A shocking climax that promises to crack the Marvel Universe to its very core!  An old foe must claim the mantle of his greatest enemy to save the lives of all he cares for!  An X-Man's horrifying fate! An Avenger's appalling choice! Thor does something dramatic! 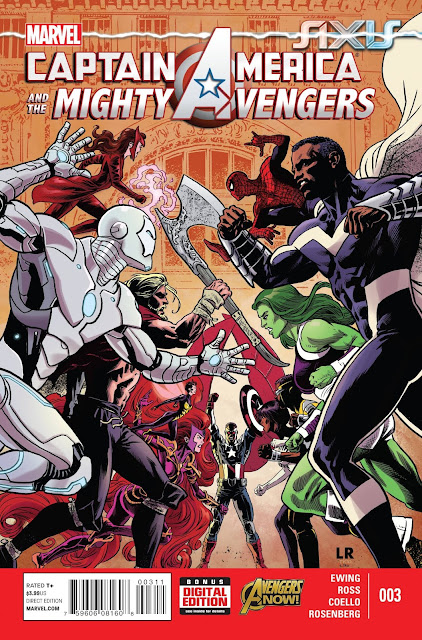 CAPTAIN AMERICA AND MIGHTY AVENGERS #3 $3.99
(W) Al Ewing (A/CA) Luke Ross
THE AVENGERS/AVENGERS WAR!  With Captain America and Iron Man bringing the full power of the Avengers against the Gem Theater, can our heroes possibly survive?  Guest-starring Spider-Man! Thor, of course, is involved in the battle. 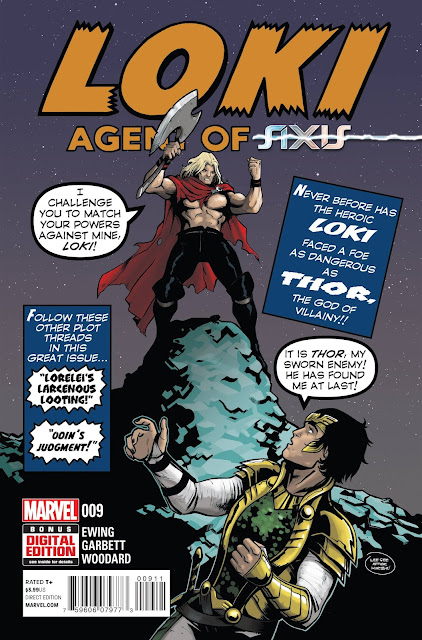 LOKI AGENT OF ASGARD #9 $3.99
(W) Al Ewing (A/CA) Lee Garbett
Loki, swashbuckling savior of truth and justice, versus Lorelei -- scheming sister of the noble Enchantress!  Once -- in a time Loki would rather forget -- these two were allies. Now, Loki must bring Lorelei in -- or die trying!  Also featuring: the base villainy of Thor -- Marvel's brutish God Of Evil! 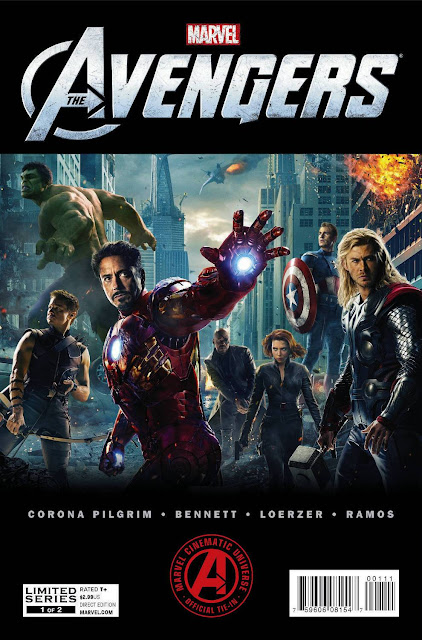 Arthur Adams variant cover
Posted by ditkomania at 5:54 AM No comments:

What I wanted for Christmas four years ago... 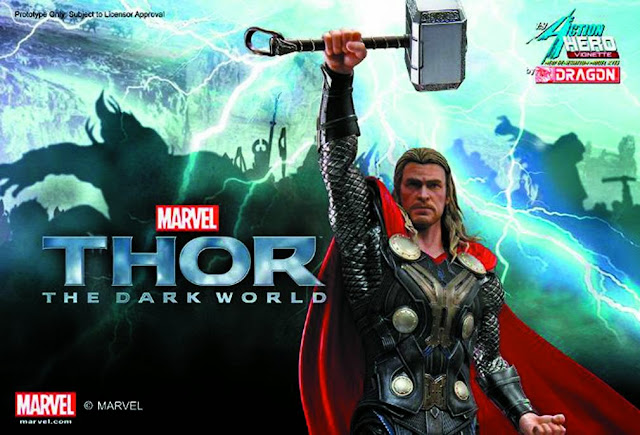 THOR THE DARK WORLD THOR AHV
From Dragon Models
Pre-painted and with just the snap of a few parts, you can have a highly detailed desktop display of your favorite hero with the new 1/9-scale Action Hero Vignettes. A hybrid between a display figure and a kit, Dragon's use of model kit techniques allow us reproduce the intricate details and sharp lines to maximize the usage of the official 3D character scans. This highly collectible display model of Chris Hemsworth as Thor was developed in 3D, using official data from Marvel. Fully colored and textured to movie likeness, the figure requires minimal assembly.

Posted by ditkomania at 1:33 PM No comments:

NEW THOR APPEARANCES IN YOUR LCS 4 YEARS AGO TODAY


AVENGERS AND X-MEN AXIS #7 $3.99
(W) Rick Remender (A) Adam Kubert (CA) Jim Cheung
THE ASTONISHING AVENGERS VS THE UNCANNY X-MEN FOR THE FATE OF NEW YORK! Shirtless Thor lounges around in one panel.

DEADPOOLS ART OF WAR #3 $3.99
(W) Peter David (A/CA) Scott Koblish
You think you know war? Deadpool doesn't think you know war. He's teaching you about war in this series. Like, the previous issues, Thor assists with the lessons. 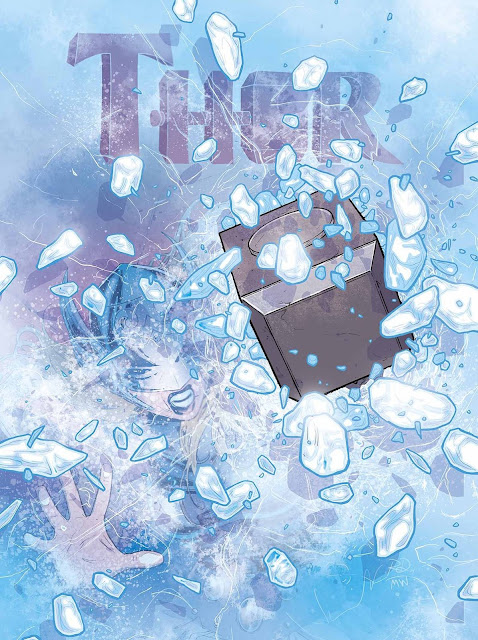 THOR #3 $3.99
(W) Jason Aaron (A/CA) Russell Dauterman
Lifting the enchanted hammer Mjolnir has transformed a mysterious woman into an all-new version of the mighty Thor. But what happens when she's separated from that hammer? Plus, Frost Giants! ROXXON! And whatever happened to the guy who used to carry that hammer? 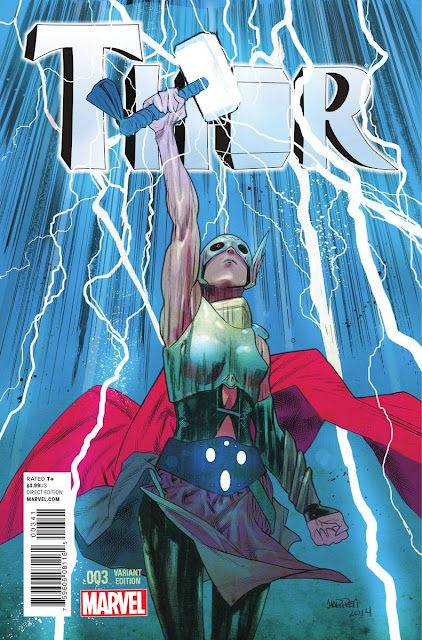 Harren variant cover
Posted by ditkomania at 4:04 AM No comments: 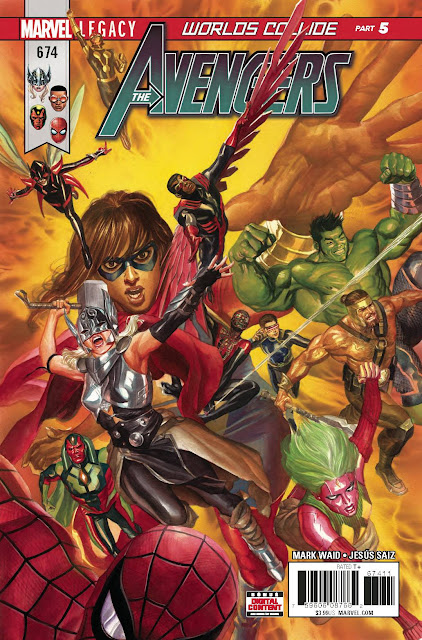 AVENGERS #674 $3.99
(W) Mark Waid (A) Jesus Saiz (CA) Alex Ross
WORLDS COLLIDE Part 5  As Earth and Counter-Earth begin to approach one another, the Avengers/Champions team must find some way to avert dual global catastrophes! Not only does Lady Thor appear on the cover, she is inside too.
Posted by ditkomania at 2:57 AM No comments:

MARVELS AVENGERS UNTITLED PRELUDE #1 $3.99
(W) Will Pilgrim (A) Paco Diaz
From the dawn of the universe came six INFINITY STONES, each in control of an essential aspect of existence: space, reality, power, soul, mind and time. Now, THANOS strives to collect them all to further his mad plan of wiping out half the universe's population. Standing between him and his goal: the AVENGERS, the GUARDIANS OF THE GALAXY, SPIDER-MAN, and more!
Posted by ditkomania at 3:25 PM No comments:

If you like these Thor photomontages that appeared 30 days apart in early 1969 thank the zeitgeist. 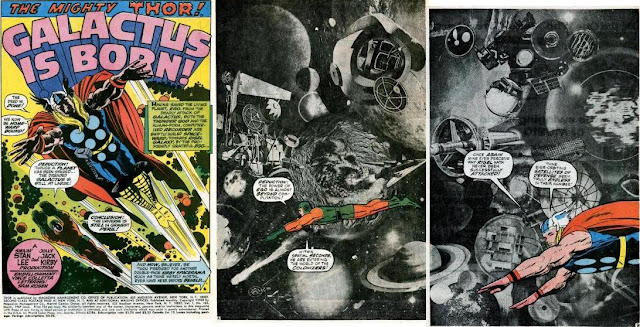 The album cover art to the BEATLES SGT PEPPER'S LONELY HEARTS CLUB BAND won a Grammy Award in 1968. In the 'Sixties more people saw album cover art than any other art. It is possible that the iconic photomontage inspired Jack Kirby to create these pages.

Posted by ditkomania at 11:05 AM No comments: