ON THE SPINNER RACKS 48 YEARS AGO TODAY

March 1971 two comics with Thor covers shipped.
The art was provided by the brothers Buscema. 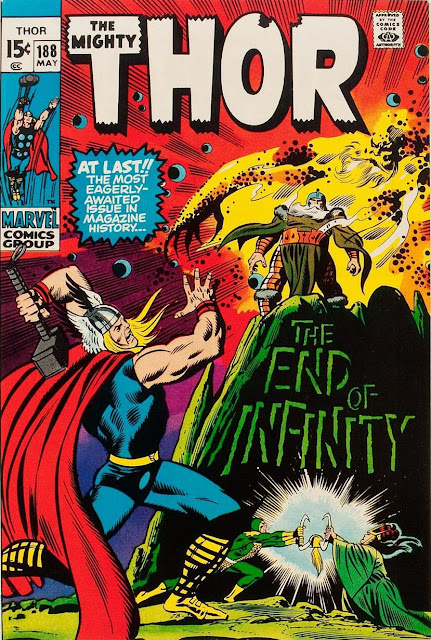 John Buscema drew the cover and the interior art. 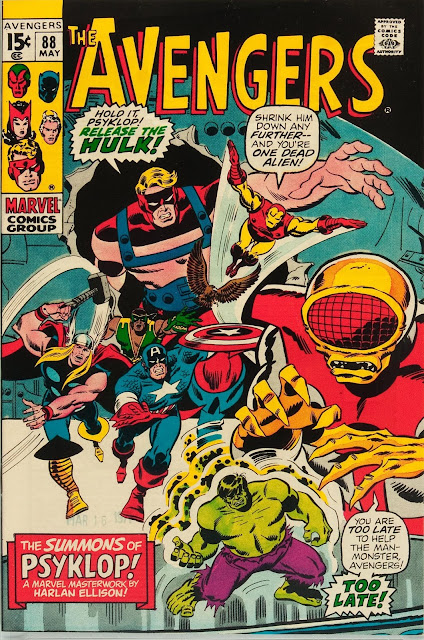 Sal Buscema drew the cover and the interior art.

And even though he didn't appear on the cover of HULK #140, Thor did appear in the Herb Trimpe-drawn issue.
Posted by ditkomania at 7:21 AM No comments:

AVENGERS #686 $3.99
(W) Mark Waid & Various (A) Paco Medina (CA) Mark Brooks
NO SURRENDER Part 12 As Wonder Man struggles to get through to the Hulk, the Black Order attacks Avengers HQ! The grand cosmic game comes to its shocking conclusion - but the war for Earth is just beginning! Lady Thor is not on the cover but she does have a large part inside.


BEN REILLY SCARLET SPIDER #16 $3.99
(W) Peter David (A) Will Sliney (CA) Khary Randolph
DAMNATION TIE-IN!  Ben Reilly is the Spider-Man who can't die - the only spider to slip through Mephisto's grasp time and again. But even the Scarlet Spider cannot avoid DAMNATION. Demon Lady Thor appears on one page (in a group shot of the Demon Avengers). 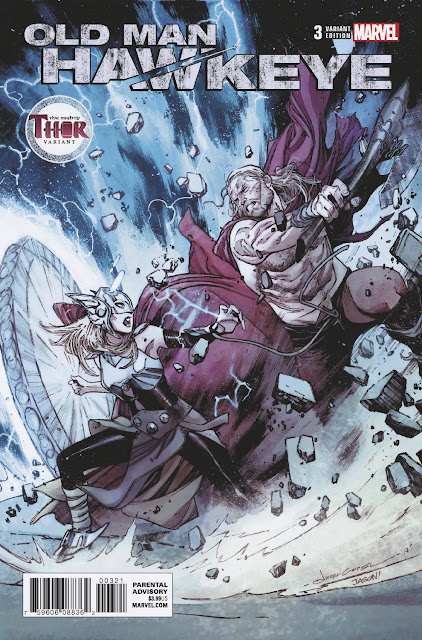 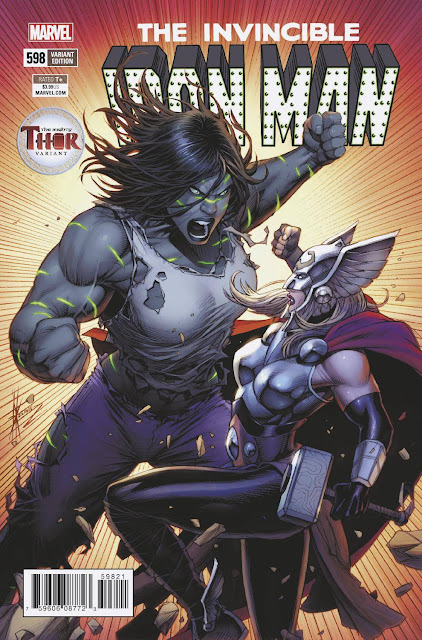 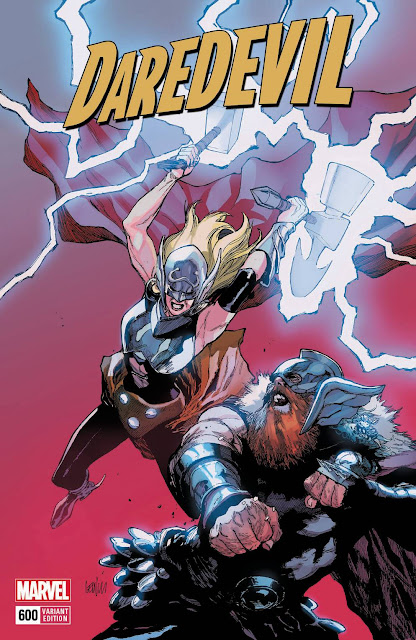 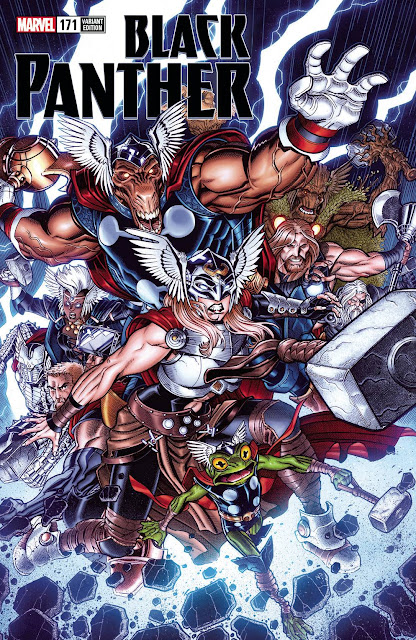 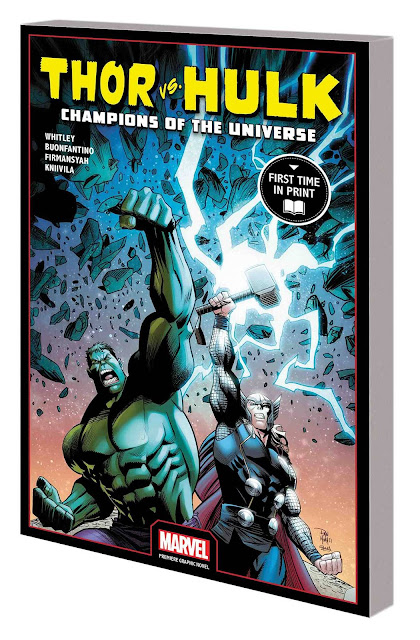 THOR VS HULK TP CHAMPIONS OF UNIVERSE $14.99
(W) Jeremy Whitley (A) Simone Buonfantino, Alti Firmansyah (CA) Dan Mora
An Elder of the Universe has come to Earth, and he means to battle our planet's strongest hero. But will Thor and Hulk ever agree on which one of them that is? Asgard's Avenger and the green goliath will have to run a gauntlet of impossible challenges to prove their worthiness to face down this cosmic menace - but what's really waiting for them at the finish line? And can even the two mightiest heroes on the planet smash their way out of this one?
This is a digital-original comic in print for the first time.


Posted by ditkomania at 6:12 AM No comments:

THE ONLY NEW THOR APPEARANCE IN YOUR LCS TOMORROW

Is a one panel silent crowd-scene cameo in

"INFINITE HOUSE OF CIVIL yet SECRET CRISIS WAR INVASIONS" marches on!  Who is this new, mysterious and OMNIPOTENT villain who has restored the fourth wall?  If he can stop Deadpool from seeing and talking to readers, WHAT ELSE CAN HE DO?!
Posted by ditkomania at 4:00 PM No comments:

IN YOUR LCS 1 YEAR AGO TODAY 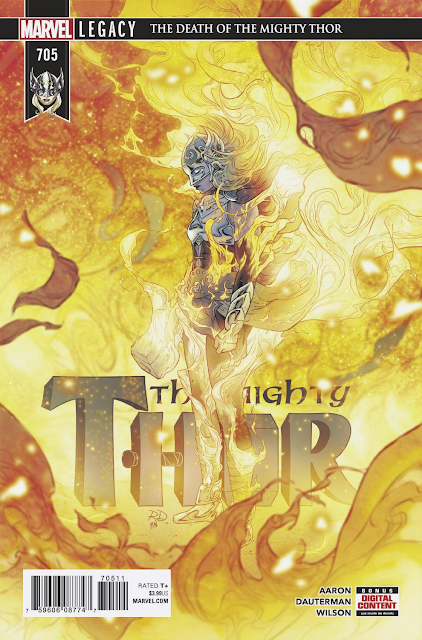 MIGHTY THOR #705 $3.99
(W) Jason Aaron (A/CA) Russell Dauterman
Thor battles the unstoppable Mangog, with the fate of all Asgardia hanging in the balance. Is Thor willing to pay the ultimate price in order to save the gods? The tragic and heroic story of Jane Foster finally reaches its heart-rending zenith. You knew it was coming. The Death of Thor is here at last. And, of course, Thor Odinson is there for it. 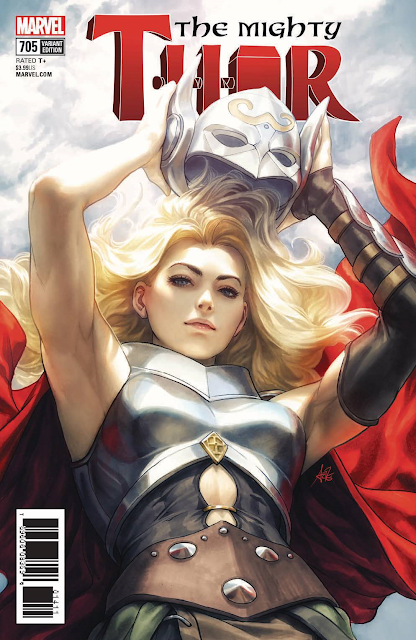 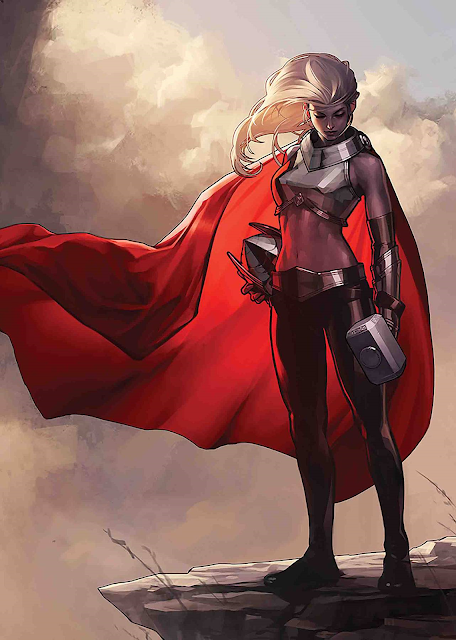 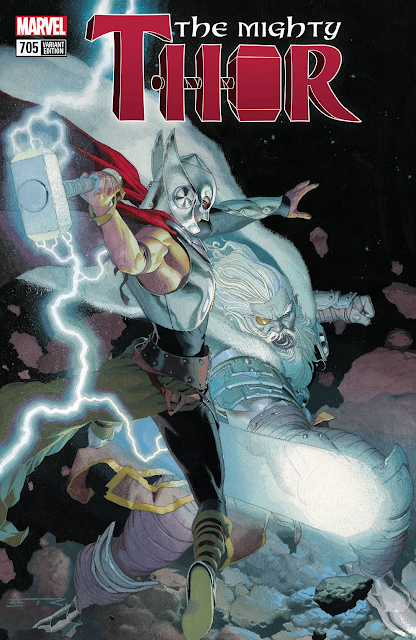 
INCREDIBLE HULK #714 $3.99
(W) Greg Pak (A) Carlo Barberi (CA) Mike Deodato
WORLD WAR HULK II BEGINS! Following his apocalyptic adventure on Planet Hulk, Amadeus Cho returns to Earth - but the raging monster inside of him has been unchained, leading to dire consequences for anybody who crosses the Formerly Awesome Hulk's path! The still hammerless Thor Odinson appears on the first 2 pages.


THANOS #17 $3.99
(W) Donny Cates (A/CA) Geoff Shaw
THE SURFER STRIKES! Thanos and his future self take on the most powerful opposition to his reign left in the universe -  Norrin Radd.   Can even two Thanoses crack his Cosmic Shell? Even though no Thors appear in this issue, Mjolner co-stars.
Posted by ditkomania at 7:40 AM No comments:

IN YOUR LCS 40 YEARS AGO TODAY

What an historic confrontation. 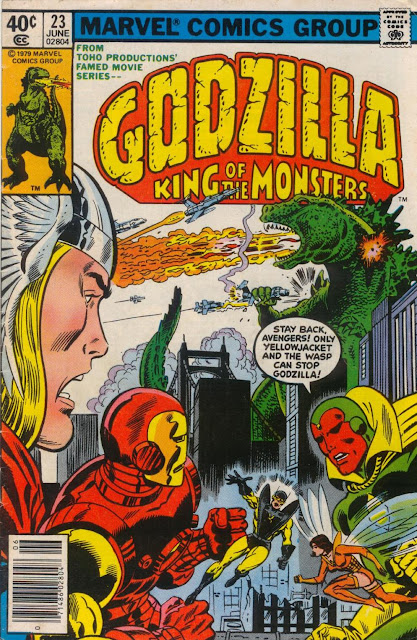 The cover and the story art were by Herb Trimpe and Dan Green. 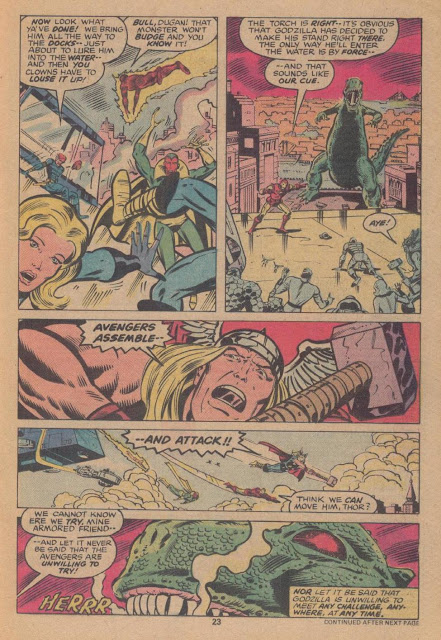 Doug Moench provided the words.
Posted by ditkomania at 1:15 PM No comments:

NEW THOR ODINSON IN YOUR LCS 4 YEARS AGO TODAY

LOKI AGENT OF ASGARD #12 $3.99
(W) Al Ewing (A/CA) Lee Garbett
He's Loki's older, nastier, vastly more powerful future self. His machinations have cost Loki everything... but who IS King Loki?  What dread Asgard is he the Agent of? And what evil scheme has he been brewing all this time? This issue -- King Loki tells all! Of course, Thor has a large role in the story.

(W) Joe Caramagna (A/CA) Various
Hulk and Hawkeye have been trapped in a televised deathmatch by the nefarious Mojo! Can they survive the onslaught of killer robot Torgo long enough to escape? Thor appears in 3 panels and has a couple sentences of dialog.
Posted by ditkomania at 5:23 AM No comments:

THE ONLY NEW THOR ODINSON APPEARANCE IN YOUR LCS TOMORROW 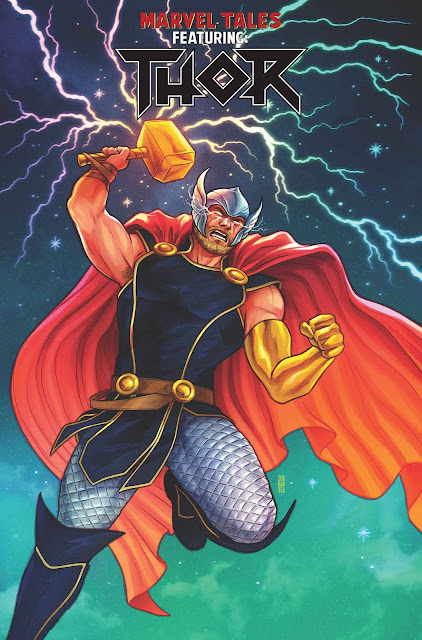 Only the cover by Jen Bartel for MARVEL TALES THOR #1 $7.99 is new.  Reprinting the debut of Thor's devious stepbrother Loki - in JOURNEY INTO MYSTERY #85! The Thunder God faces Hercules in JOURNEY INTO MYSTERY ANNUAL #1! The Avengers are taught a lesson by the Asgardian Valkyrie and her Lady Liberators in AVENGERS #83! And Walter Simonson's legendary run begins with the  arrival of Beta Ray Bill in THOR #337!

Posted by ditkomania at 2:50 PM No comments:

NEW THOR IN YOUR LCS 4 YEARS AGO TODAY 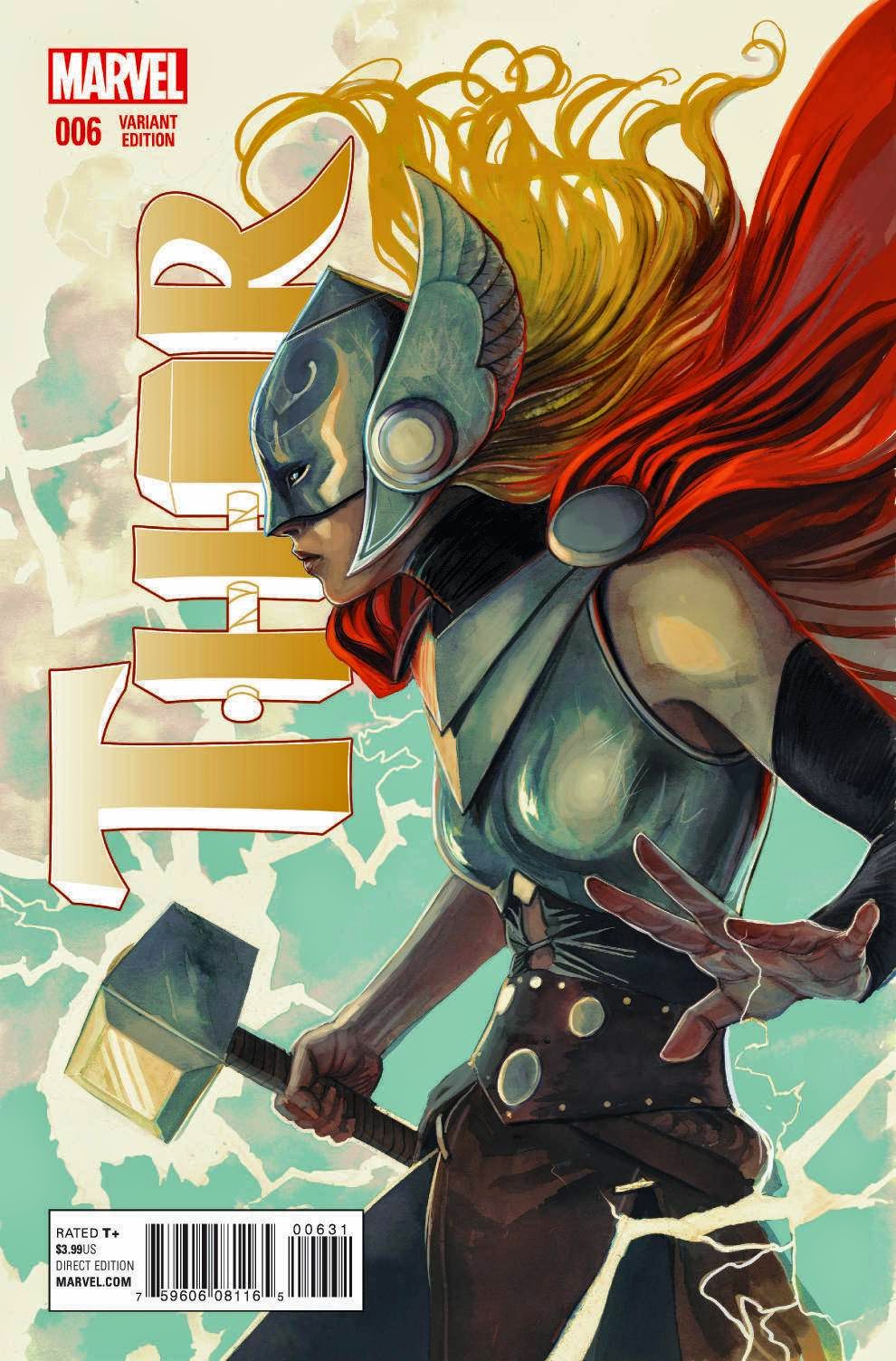 THOR #6 $3.99
(W) Jason Aaron (A/CA) Russell Dauterman
WHO IS LADY THOR?  That's the question on everyone's lips. Most especially Prince Odinson of Asgard. This issue, he starts to narrow down the list of suspects. Meanwhile, tensions continue to flare between the All-Mother and All-Father, Malekith forges his most dangerous pact yet, and Thor prepares to face her greatest challenge! 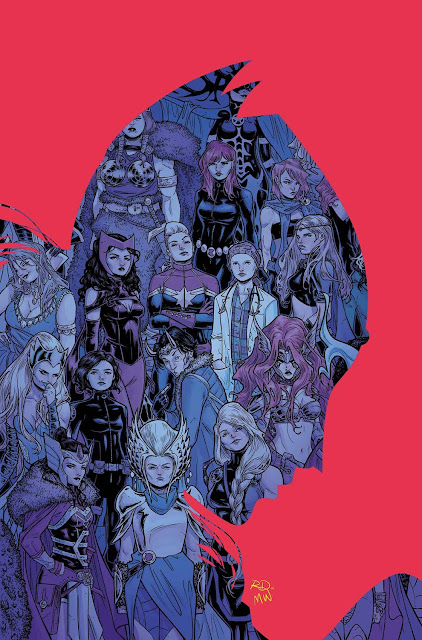 WOMEN OF MARVEL Variant
Posted by ditkomania at 4:40 AM No comments:

How familiar was the average literate American with Thor in 1940? There is a story called "The Roaring Trumpet" by L. Sprague De Camp and Fletcher Pratt published in the May 1940 pulp magazine UNKNOWN. The 77 page story lead off the magazine and it featured Thor, Odin, Loki and Heimdall. Pagsilang Rey Isip's comic book, pulp and movie poster art added to the zeitgeist of America for four decades including the Thor painting he did for the UNKNOWN cover. 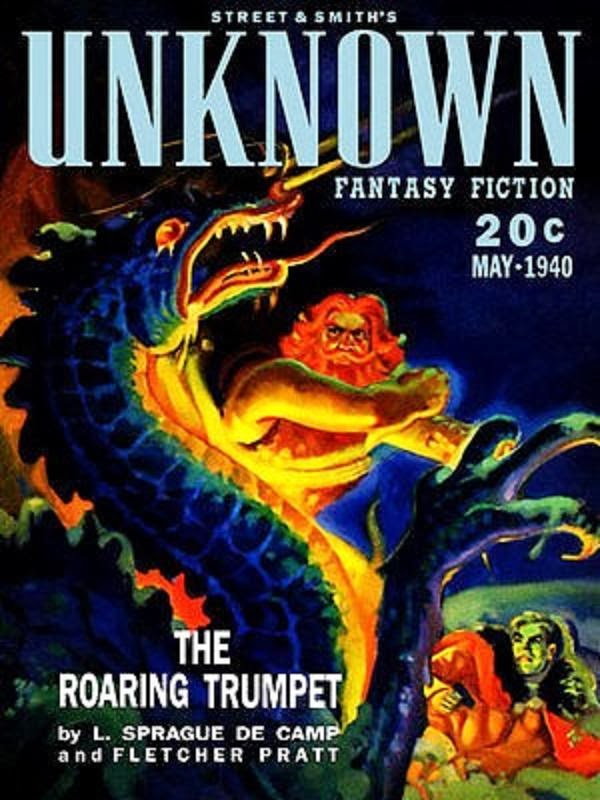 The interior art for "The Roaring Trumpet" was by Edd Cartier, a prolific artist who is best known for illustrating The Shadow's stories. 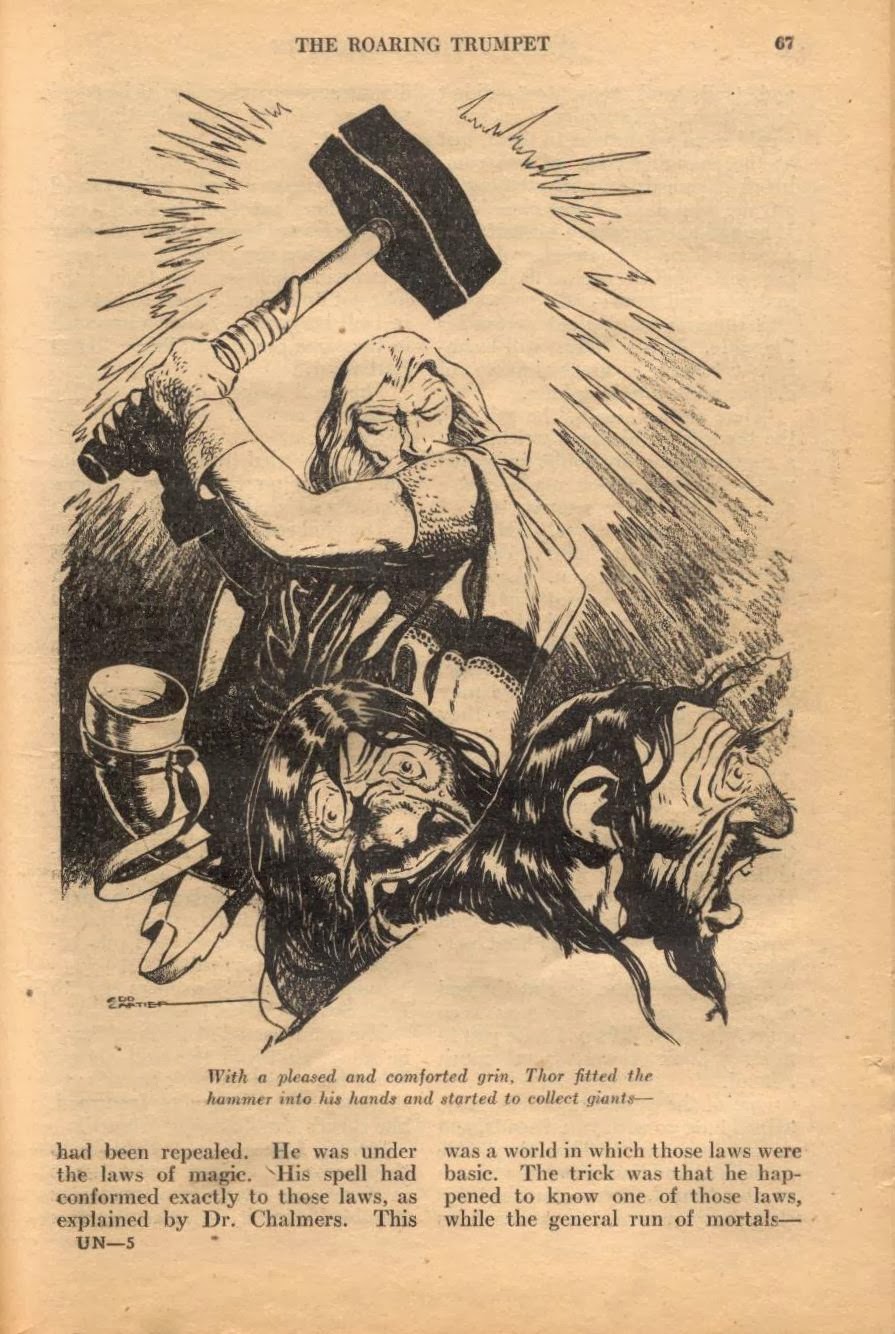 Posted by ditkomania at 3:55 PM No comments: