NEW THOR APPEARANCES IN THE SHOPS 2 YEARS AGO TODAY

ZOMBIES ASSEMBLE 2 #3 $4.99
(W) Yusaku Komiyama, Jim Zub (A) Yusaku Komiyama (CA) Kiichi Mizushima
The zombie plague rages on! More and more of New York City's population is being infected - without a cure in sight. And there's something not quite right about Jasper Scott - it's only a matter of time before the Avengers find out firsthand what he's hiding. What role did he have in spreading the virus? And what does he want with Tony Stark? Printed in black and white in the original right-to-left 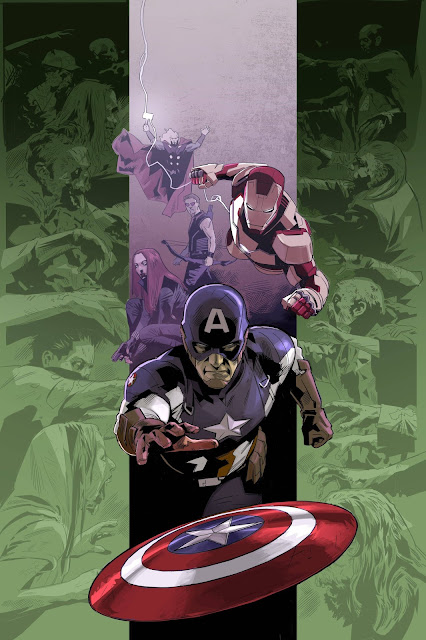 UNCANNY AVENGERS #28 $3.99
(W) Jim Zub (A) Sean Izaakse (CA) R. B. Silva
Two of Earth's mightiest friends, Wonder Man and the Beast. When the world throws you cosmic conflict, global calamity, death, rebirth and heartache aplenty, it's important to remember where your friends are. No Thor in the main story.
PLUS: Includes the same 3 bonus MARVEL PRIMER PAGES that appeared in AVENGERS #672 last week. Story by Robbie Thompson and art by Daniel Acuna with The Real Deal Thor back in the day with the Avengers!!!
Posted by ditkomania at 6:33 AM