NEW THOR ODINSON IN YOUR LCS 1 YEAR AGO TODAY

SPIDER-MAN DEADPOOL #49 $3.99
(W) Robbie Thompson (A) Jim Towe (CA) Dave Johnson
A battle royale of epic event proportions!!!  Make sure the roof you read this issue under is well-supported, because we're gonna DESTROY THE FOURTH WALL.  The danger is coming...FROM THE OTHER SIDE OF THE PAGE!!! Thor Odinson plays a major part or as Deadpool put it "Can't forget blondie!"


WAR OF REALMS JOURNEY INTO MYSTERY #1 $3.99
(W) Clint McElroy & Various (A) Andre Araujo (CA) Giuseppe Camuncoli
Earth is at war, besieged by an army of Frost Giants, Trolls and Fire Goblins - and the mighty Thor is nowhere to be found! But could it be that the key to turning the tide is...Thor's baby sister? Journey into Mystery with Spider-Man (Miles Morales), Hawkeye (Kate Bishop), Wonder Man, and Balder the Brave as they go on an epic quest to save Earth's only hope! Thor and Thori appear. 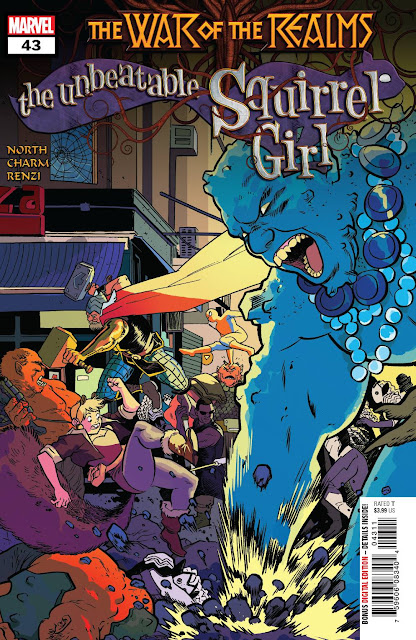 UNBEATABLE SQUIRREL GIRL #43 $3.99
(W) Ryan North (A) Derek Charm (CA) Erica Henderson
WAR OF THE REALMS TIE-IN! When Earth is attacked as part of the WAR OF THE REALMS, Squirrel Girl is called back from her Negative Zone vacation, and Loki recruits her as part of a secret mission! Even though Thor appears on the cover he DOES NOT appear inside

Posted by ditkomania at 5:50 AM