Only one Thor appearance from Marvel 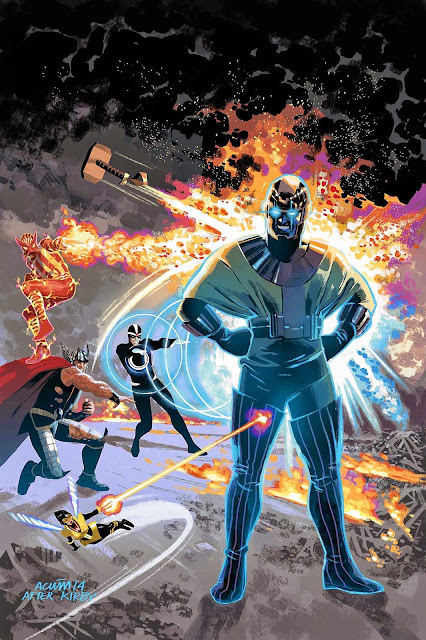 
The Avatar Press Thor appears in
GOD IS DEAD #17 $3.99
(W) Mike Costa (A) Omar Francia
Jesus Christ walks the earth once again.  But gone are the visions of his pity and sacrifice.  Now the world trembles as the returned gods struggle to grasp the last piece of humanity for themselves. 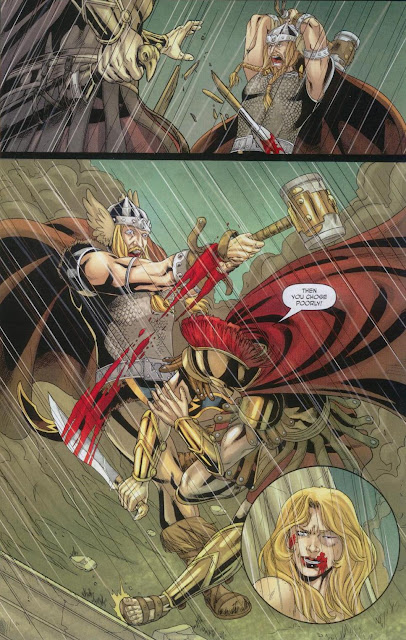 Posted by ditkomania at 6:19 AM No comments: 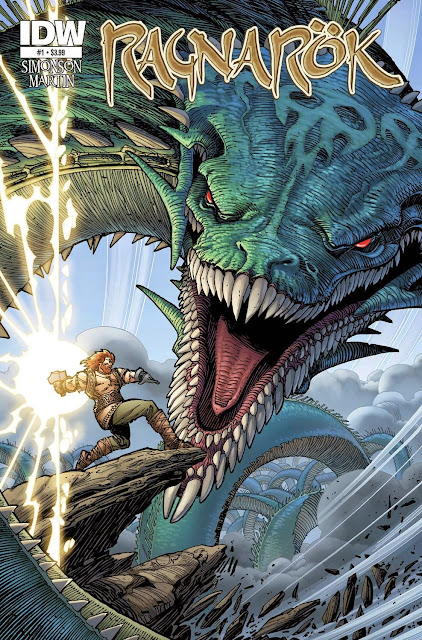 Ragnarök...the Twilight of the Gods in Norse mythology...the destruction of the Nine Worlds.  And now, three hundred years later, the birth of vengeance. 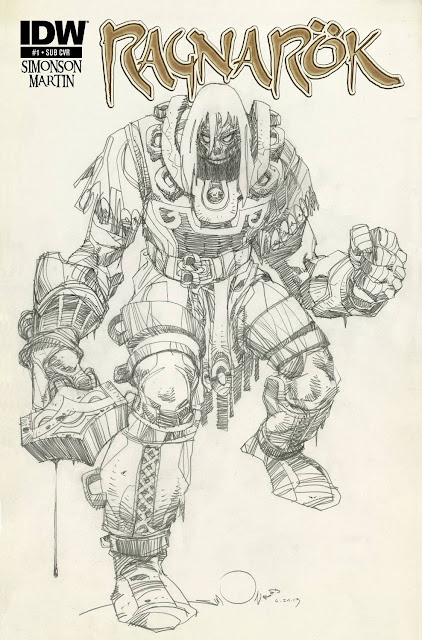 
ORIGINAL SIN #5.2 $3.99
(W) Jason Aaron, Al Ewing (A) Simone Bianchi (CA) Dale Keown
Thanks to the events of ORIGINAL SIN, the deepest secret of the Nine Realms is revealed... a Tenth Realm! Thor and Loki embark on a quest to discover this strange new world -- and the sister Thor never knew he had!

DAREDEVIL #6 $3.99
(W) Mark Waid (A) Javier Rodriguez (CA) Chris Samnee
When Matt learns something about his past that's too terrible to accept he seeks out his mother only to find her in more trouble than he could possibly have imagined. Thor cameo in a double-page spread depicting a key event from ORIGINAL SIN.

ORIGINAL SINS #4 $3.99
(W) Charles Soule & Various (A) Various (CA) Mark Brooks
The ORIGINAL SIN of DOCTOR DOOM! (Thor appears in an Avenger-crowd-scene cameo)
Posted by ditkomania at 7:48 AM No comments:

OLD MAN LOGAN #3 $3.99
(W) Brian Michael Bendis (A/CA) Andrea Sorrentino
Having survived his first step in his quest across the realms of Battleworld, Logan has come face to face with the horrors mutantkind can produce.  But mutants are not the sole purveyors of horror on this patch-worked planet. And Logan's job is far from finished. Two Thors confront Logan.
Posted by ditkomania at 3:11 AM No comments:

IN THE SHOPS 2 YEARS AGO TODAY

CONTEST OF CHAMPIONS #10 $4.99
(W) Al Ewing (A) Rhoald Marcellius (CA) Skan
IRON PATRIOT SUPREME!  Maestro's team of dark Avengers were powerful enough to go toe-to-toe with the renegade Champions, but are they too powerful even for him? A clone of Thor Odinson takes part in the battle.

A-FORCE #7 $3.99
(W) Kelly Thompson (A/CA) Ben Caldwell
After narrowly escaping a grisly death at the hands of one of their own, a weary but determined A-FORCE make bold moves to free NICO and the town from Countess's control. However, saving the day is going to take more than just super-powered punches.  A-FORCE is going to have to go deeper than that - changing Countess's very mind. Meanwhile, developments with the team's sparkly THOR rock A-FORCE to the core.
Posted by ditkomania at 3:43 AM No comments:

SLIM THOR PICKINGS IN THE SHOPS 4 YEARS AGO TODAY

AVENGERS WORLD #9 $3.99
(W) Nick Spencer (A) Stefano Casselli (CA) Ryan Stegman
Cannonball and Sunspot have twenty-four hours in the future to find the help the Avengers need. They're just gonna stop for a drink first. Thor only appears on the synopsis page

TOMORROW'S ONLY NEW THOR APPEARANCE IN THE SHOPS

AMAZING SPIDER-MAN #1 $5.99
(W) Nick Spencer (A/CA) Ryan Ottley
An alien invasion hits New York City and the only one who can stop it is...Spider-Man?! But that's far from all you'll find here -  a revelation from the past puts Peter Parker's job, relationships, and whole life in jeopardy! And if even that's not enough, you'll see a new roommate, new love interests - and a new villain! Thor makes a silent 1 panel cameo in both the lead story and the the back-up. 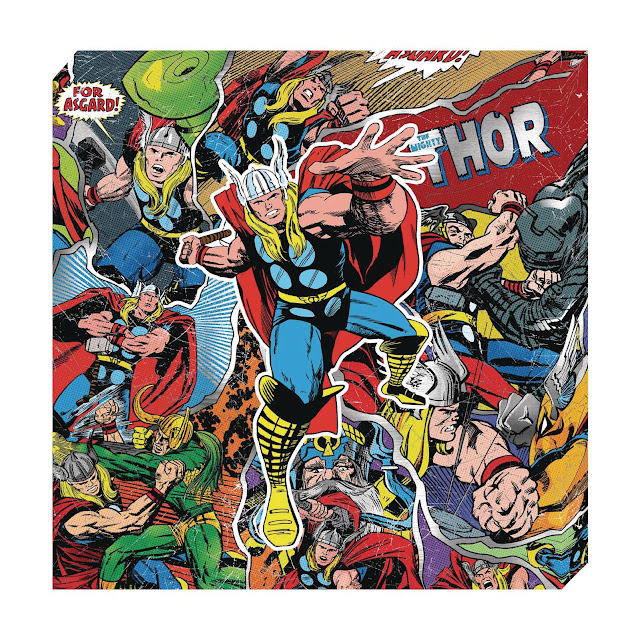 Metallic sheen canvas print of your favorite Marvel Comics character featuring a montage of artwork, taken from the covers of some of your favorite comic books. Bring some energy into your home or office with this print of Thor.
Posted by ditkomania at 6:54 AM No comments: 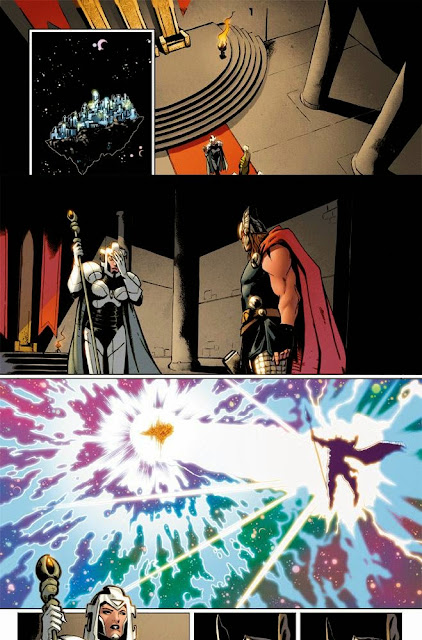 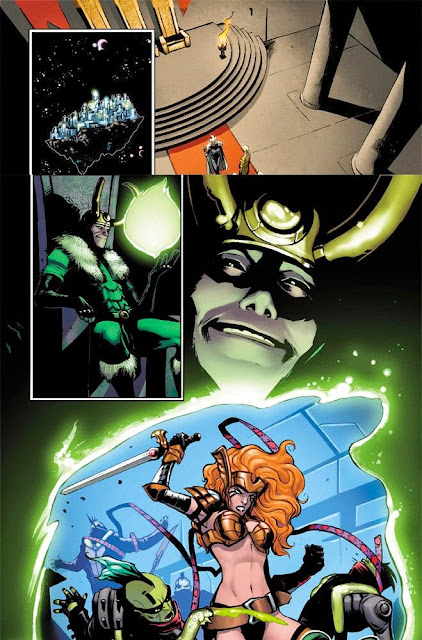 The deepest secret of the Nine Realms is revealed... a Tenth Realm! Thor and Loki embark on a quest to discover this strange new world and the sister Thor never knew he had!  But can Loki be trusted? Will brother and sister murder each other before the truth comes out?

IN THE SHOPS 3 YEARS AGO TODAY

GHOST RACERS #2 $3.99
(W) Felipe Smith (A) Juan Gedeon (CA) Francesco Francavilla
How did ROBBIE REYES become a cursed GHOST RACER?  Is his sizzling winning streak the ONLY reason why his fellow Ghost Racers despise him and crave to see him fail? Two Thors make a brief appearance.

(W) Joe Caramagna (A/CA) Various
Hawkeye travels to Monster Island to train the newest addition to the Avengers: Ant-Man!  The island holds a secret more terrifying than giant monsters: A secret base of the Red Skull! Thor appears in 3 panels but has no dialog.

(W) Gerry Duggan (A) Salva Espin (CA) Reilly Brown
Undisputed Queen of the Monster Metropolis is out to avenge the death of her brothers!  Teamed with Werewolf By Night, Frankenstein's Monster, the Living Mummy, Man-Thing, and Marcus the Centaur, she must fight their way through the land of the undead! Speaking of - How DOES one kill DRACULA, King of the Undead? Two previously unseen members of the Thor Corps make a brief appearance.
Posted by ditkomania at 5:51 AM No comments:

IN THE SHOPS 1 YEARS AGO TODAY 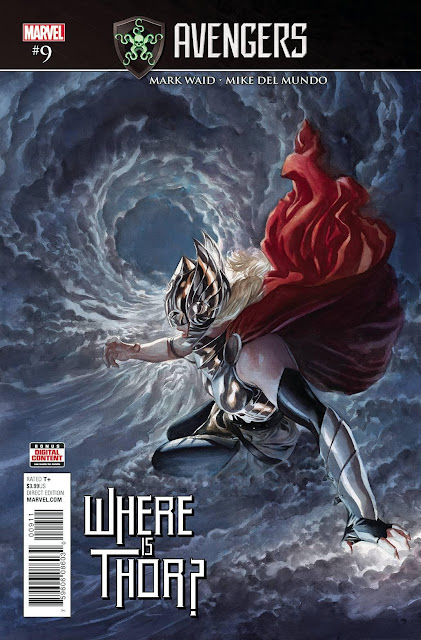 AVENGERS #9 $3.99
(W) Mark Waid (A) Mike Del Mundo (CA) Alex Ross
The most loved Avenger of all has now shown his true colors - and the Avengers will have to put their allegiances to Steve Rogers aside and fight the good fight!  But for one Avenger, that fight is very far away indeed! Trapped in a nameless land, a timeless time, can Lady Thor find her way back to the here and now in order to return to the struggle?

DEADPOOL KILLS THE MARVEL UNIVERSE AGAIN #1 $3.99
(W) Cullen Bunn (A) Dalibor Talajic (CA) Dave Johnson
Remember the time Deadpool went a little TOO crazy and killed the entire Marvel Universe? Well, this is  ANOTHER tale of Deadpool taking out all of your faves in the most horrific ways possible! Lady Thor makes a brief appearance. 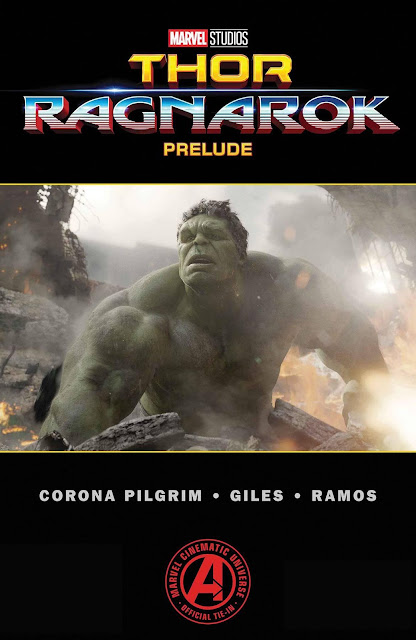 MARVELS THOR RAGNAROK PRELUDE #1 $3.99
(W) Will Pilgrim (A) J. L. Giles
BRUCE BANNER has been trying to put the past behind him as he learns to control the powerful beast inside him. But as GENERAL ROSS continues to hunt the fugitive Banner, it's only a matter of time before the HULK will smash! Join us for part one of our lead-up to 2017's cinematic event Marvel's Thor: Ragnarok!
WARNING: not only does Thor not appear on the cover, he doesn't appear on the inside either.

Posted by ditkomania at 6:36 AM No comments: 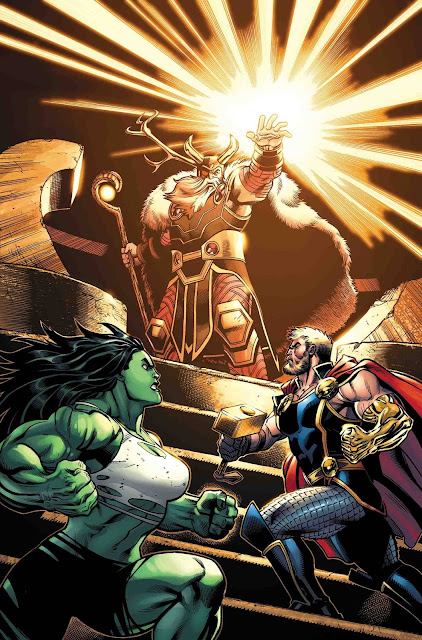 AVENGERS #4 $3.99
(W) Jason Aaron (A) Ed McGuinness, Paco Medina (CA) Ed McGuinness
How do the Avengers possibly defeat a crew of 2,000-foot-tall, nearly omnipotent Dark Celestials bent on annihilating the human race? While Thor and Hulk search for answers deep within the bowels of Old Asgard, we learn more about the untold history of Odin and his Prehistoric Avengers!

DEADPOOL #2 $3.99
(W) Skottie Young (A/CA) Nic Klein
A strange and powerful being from outer space is coming to destroy Earth - but WHY? WHO CARES?! Deadpool is totally going to merc it dead! A silent Thor appears in 2 panels.


ASTONISHING X-MEN #13 $3.99
(W) Matthew Rosenberg (A) Greg Land, Oscar Bazaldua (CA) Greg Land
The Reavers are back, and they have a new weapon that only Havok knows about. It's going to take a ragtag group of X-Men to save a world that hates and fears them! But after his villainous turn, can any of the X-Men really trust him? Can he blame them? Havok! Beast! Dazzler! Warpath! Colossus! A silent Thor Odinson appears in 2 panels.
Posted by ditkomania at 10:02 AM No comments:

CAPTAIN AMERICA #22 $3.99
(W) Rick Remender (A/CA) Carlos Pacheco
After the events of last issue how can Steve Rogers survive his new situation?  Two of his oldest foes move forward their plot! Enter Arnim Zola and The Red Skull!  Can even Thor and the Avengers keep Rogers safe? 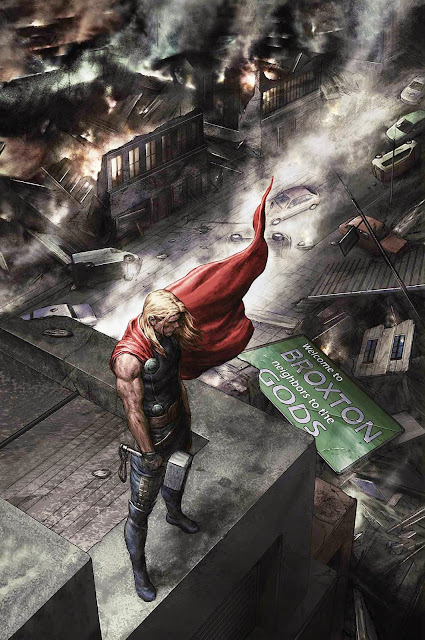 Thor's battle against ROXXON has colossal ramifications for all of Asgard. And also for... Jane Foster?  While in the far future, what dark fate has befallen Galactus at the hands of the King Thor?
Posted by ditkomania at 6:15 AM No comments: